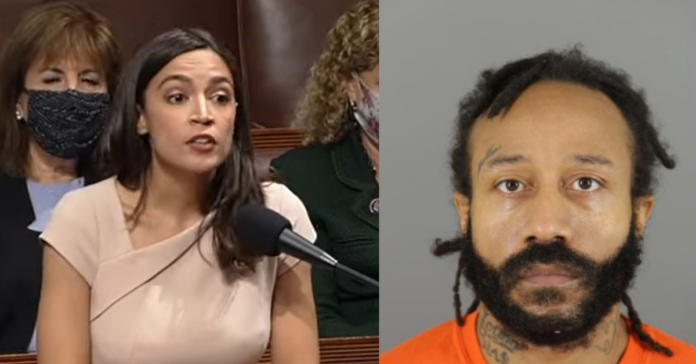 Alexandria Ocasio-Cortez and the rest of the tone deaf Dems just handed the GOP the state of Wisconsin heading into the critical 2022 elections. AOC acts like the Dems won a landslide victory in the last election when it was a squeaker that could have gone the other way.

The arrogance always comes before the fall and the fall will be hard. The Wisconsin Governor’s race and other local elections in 2022 will have a massive impact on the presidential election in 2024. Always does. After the Milwaukee DA came clean and said Darrell Brooks’ bail was inappropriately low and ordered a review of the process what did AOC do?

She pushed for bail reform. This will be on the ballot in 2022 and not surprisingly the Dems are on the wrong side of history. “We have grave concerns that excessive bail amounts are leading to unnecessary pretrial detention and contributing to a humanitarian crisis in New York City’s jail system, particularly on Rikers Island,” AOC and two other members of Congress said in a statement.

“Fourteen people have died this year in the custody of New York City Department of Correction. Condemning thousands of individuals to languish in an environment plagued by persistent overcrowding and mounting violence as they await trial is not acceptable and risks violating the federal civil rights of these individuals. If these conditions are not addressed, federal intervention may be necessary to protect detainees from additional harm.”

Darrell Brooks, charged with five counts of murder, was out on bail after being charged with purposely running over a woman with his vehicle on November 5.

The Dem DA in Milwaukee was a promoter, like so many other liberal DA’s who are ruining cities from Chicago to San Francisco, of reforming the bail system.

The DA now says Brooks’ bail was ‘inappropriately low’ for his most recent domestic violence charge.

“EAP reported that she was walking eastbound on W. Appleton to the BP Gas Station at 7311 W. Capitol Drive. EAP reported that BROOKS followed EAP there and pulled up besides EAP and told EAP to get into the vehicle. EAP refused to get into the vehicle and BROOKS, intentionally and without consent, struck EAP in the face with a closed fist. EAP walked away from BROOKS.

“EAP reported that BROOKS then, intentionally and without consent, ran EAP over with his vehicle while EAP was walking through the parking lot of the BP gas station.”

“Below is the summary of pending charges against Mr. Darrell Brooks: On July 27, 2020, the Milwaukee County District Attorney’s Office issued two counts of second-degree Recklessly Endangering Safety and Felon In Possession of a Firearm in case2020CF002550.

“Cash bail was originally set at $10,000 and subsequently reduced to $7,500.Unlike some other states, Wisconsin requires payment for the full amount of bail set in any criminal case.

“The case was adjourned and bail reduced to $500, which the defendant posted on February 21, 2021. On November 5, 2021, the Milwaukee County District Attorney’s Office issued against Mr.Brooks charges of Second Degree Recklessly Endangering Safety, Felony Bail Jumping, Battery, Obstructing an Officer, and Disorderly Conduct in case 2021CF004596.

“The most recent case against Mr. Brooks was appropriately charged. The State made a cash bail request in this case of$1,000, which was set by the court.

“The defendant posted $1,000 cash bail on November 11, resulting in his release from custody. The State’s bail recommendation in this case was inappropriately low in light of the nature of the recent charges and the pending charges against Mr. Brooks.

“This office is currently conducting an internal review.”

The day after a massacre occurred in Wisconsin by a violent criminal released under bail reform policies, AOC posts this. https://t.co/JkkxBiDXi4

BREAKING: The Milwaukee Co. District Attorney says Waukesha suspect Darrell Brooks should not have been released on such a low cash bond earlier this month. They are conducting an internal review.#Waukesha #waukeshaChristmasParade pic.twitter.com/GmUNOkwLpg