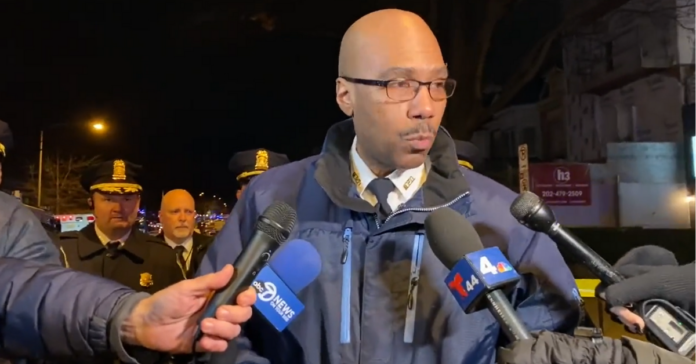 The Black Lives Matter chapter in Washington, D.C., is not happy the media treats policemen killed or injured in the line of duty as heroes after an officer was shot and wounded Sunday night in Northwest D.C.

BLM DC also ripped the African American police chief for giving ‘tear-jerker press conferences’ honoring the fallen heroes. With crime spiraling out of control due to disastrous liberal policies in almost every major American city, this is an off stance to take.

“This is the point we’ve been making for months,” BLM DC tweeted. “Look at the reaction and coverage tonight. Tearjerker press conferences and proclamations of heroes coming soon. Imagine if people knew these folks’ names. Being Black in DC is more dangerous than any job.”

“This isn’t to say these scenarios represent what happened tonight, but it does explain our skepticism, interest in details, and highlights the difference in how people talk and act when an officer is hurt vs when they hurt a Black person. No one asks what the cop did wrong,” the group wrote.

The linked to a page that said:

DC is an occupied police state. With more than 32 independent police departments, DC is the most heavily policed city in the country.

There is MPD, Metro Police, library police, housing  police, every university has a police department, park police, FBI police and Capital and Secret Service police, and so on.

In the fight for Black lives, one of the many rebuffs we receive when demanding an end to police violence and terror is that “not all cops are bad cops.”

This assertion is almost always coupled with examples of law enforcement officials who step outside of their assigned duties to “help” Black people and champions the belief that we can change systems by changing the individuals who work within this system, but not the system.

We’ve seen time and again that doesn’t work. Policing and the system under which police work exists is bound to the enslavement, degradation, and murder of Black people and was never meant to protect us, but instead to exploit our bodies and labor to fill prisons and bolster capitalism. No amount of feel-good videos can deny that truth — no dancing, ice cream peddling, dance videos, BBQ eating COPAGANDA can change that.

The confirmation of Chief Robert Contee is no surprise to us. The police got a raise, and an extra $43 million in overtime during a pandemic, but still cannot slow or stop the blood from running in our streets. People dismiss the so-called “rhetoric” of Defund, but interestingly never have data to prove we are wrong.

That is likely because we only use MPD’s data. We like concrete evidence to back up what they call rhetoric. To be clear, MPD just released data based on 80,698 total stops made from January 1, 2020 to December 31, 2020 that showed:

Only 1.22% of all stops in the five-month of data lead to the seizure of a weapon of any kind.

With respect to guns, stops leading to the seizure of a weapon of any kind only 1.0% of all stops and 2.2% of all non-traffic stops led to the recovery of a firearm in 2020.

The data confirms that policing has not, is not, and cannot stop the bloodshed.

Our fight has always been and will remain a fight against the institution of policing. We are clear that the race, origin story, lived experience, and birthplace of any person occupying the position of Police Chief will never “fix” policing, and that reform doesn’t work. There have been Black police chiefs and commissioners as well as Black Mayors for years in cities all over the nation, and nothing has changed.

This is bigger than one person. Black people make up 46% of DC’s population and MPD is already 60% Black. And as Contee indicated, living in DC also does not make a difference.

Prior to being confirmed as Chief Robert Contee was the Assistant Chief over the Investigative Services Bureau, which houses the Narcotics and Special Investigations Division (NSID) and Jumpouts.

We have long fought against this unit’s illegal jumpout tactics, targeted harassment, exclusive use of force on Black people, and ties to white supremacy. Despite now saying he will look at the Gun Recovery Unit, he has been complicit in their actions despite their failure to reduce homicides as demonstrated in MPD’s own data.

This is the point we’ve been making for months. Look at the reaction and coverage tonight. Tear jerker press conferences and proclamations of heroes coming soon. Imagine if people knew these folks’ names. Being Black in DC is more dangerous than any job. https://t.co/KqcmTNsnl1 pic.twitter.com/3W6KWp7Ng3