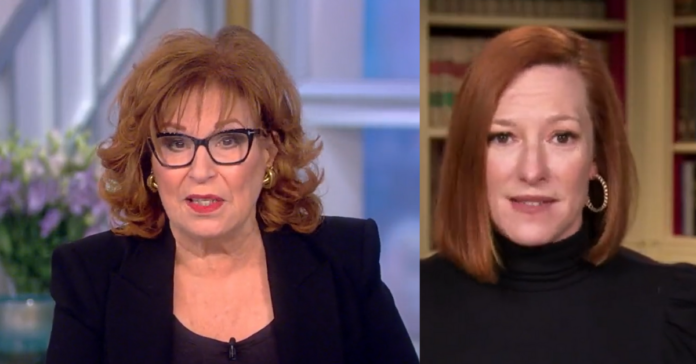 Foreign journalist Gerard Baker wrote of Biden’s first year in office, ‘there are bad years, there are very bad years and then there is Joe Biden’s inaugural year as president.” White House press secretary Jen Psaki went on The View today to rally the troops and told Dems frustrated Biden failed again with the voting bill to drink booze or go kickboxing to get over it.

Jen said: “So my advice to everyone out there who’s frustrated, sad, angry, pissed off – feel these emotions, go to a kickboxing class, have a margarita, do whatever you need to do this weekend and then wake up on Monday morning, we’ve got to keep fighting.”

Joy Behar asked Psaki if she still planned to leave the job sometime this year. Psaki said: “I don’t know when I’m leaving. This is an honor and a privilege and I love working for President Obam-Biden,” she said correcting herself.

She continued: “I love spending time with him, hearing what’s on his mind. Going on the road with him is actually the best thing possible.

After the Senate failed to pass voting rights legislation this week, @PressSec Jen Psaki tells #TheView that the path forward is to “keep fighting.”

“We also need to make sure people are educated in states across the country about what their rights are.” https://t.co/cVclFZQmjA pic.twitter.com/80QmmQcwjv

“I wish everybody could have that experience because he gets so much joy out of it. No one likes a rope line more than President Biden.

“So I spend a lot of time here, it’s a joy. But I’m also potty-training by 3-year-old, my 6-year-old is in kindergarten and I don’t want to miss things in their life either.’

“I also think that this is a job where it will be time for a new face at a certain point in time.

On the future of Build Back Better Act: “We’re dealing with some realities here, we only have 50 votes in the Senate, every single one of them has to support it to move this forward.

“There’s agreement on those fundamental values, that’s the good news.

She also tried the favorite Dem trick of trying to blame the GOP for their failures:

“Sixteen Republicans in the Senate today, including Mitch McConnell, have voted to protect voting rights in the past.”

White House @PressSec tells #TheView Republican obstruction has “gotten worse since Trump”: “Sixteen Republicans in the Senate today, including Mitch McConnell, have… voted to protect voting rights in the past.”

“What has changed? Trump’s control over the party?” pic.twitter.com/BLMpJEFNB8