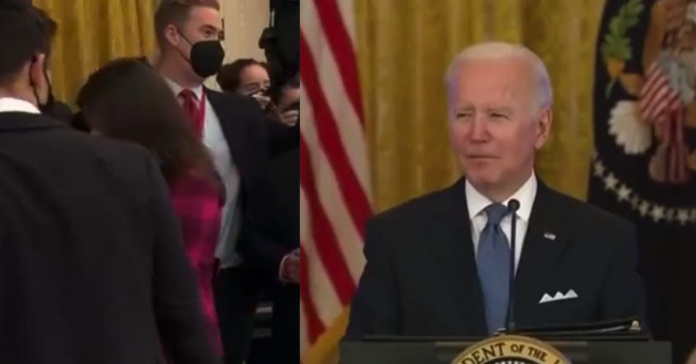 President Joe Biden was busted cursing out a Fox News reporter on a hot mic today as Biden tries and fails to stop his slide in the polls. Fox News’ Peter Doocy asked Biden a question about inflation to get Biden the reaction from Joe.

Because Biden knows how bad it is. Doocy shouted a question at Biden at the end of a photo opp about inflation and how it will politically impact both Biden and the Dems in the midterms, “Do you think inflation is a political liability in the midterms?”

Biden seemed to ignore Doocy but mumbled under his breath, ‘it’s a great asset, more inflation, what a stupid son of a b*tch.” But it gets worse for Joe Biden. According to a new poll, he is losing the suburbs. After only one year.

“The latest findings mark a major shift for both parties heading into the midterms. During the Trump administration, suburban voters swung toward Democrats, giving the party control of the House in 2018 and the Senate and the presidency in 2020.”

During the White House press briefing on Monday, Psaki was asked by Fox News’ Peter Doocy on what the Biden administration believes is fueling the crime surge that has stunned Americans.

Psaki pointed to “gun violence” as a “huge reason” for the uptick in crime as well as the “underfunding of some police departments and their need for additional resources.”

The press secretary said that President Biden has “advocated” for additional resources for police “consistently” throughout his multi-decade political career and is something the White House knows “we need to take action on.”

“And it is absolutely true that he will not be satisfied or complacent when officers are being gunned down or when Americans have to worry about whether they can safely ride the subway or bus,” Psaki said, again pointing to Biden’s pushing of police funding in his political career. “That should not be a political issue.”

Doocy laughs it off.
“Nobody has fact checked him yet and says it’s not true.” pic.twitter.com/KXeDXjDil6

Here’s the hot mic moment that everyone is tweeting about. pic.twitter.com/0tSs8fesy9