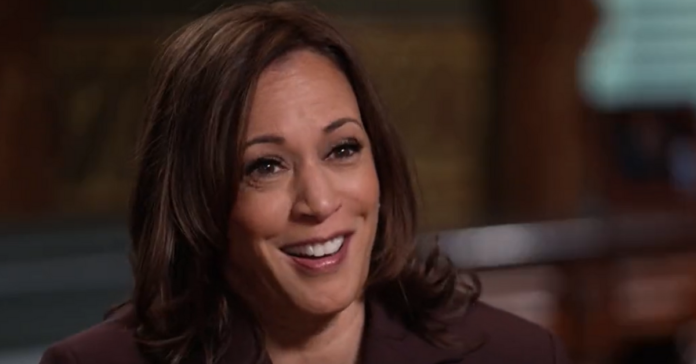 Vice President Kamala Harris just did the impossible and flubbed the easiest question in politics in an interview meant to boost her approval ratings. Most would consider it political malpractice not having a ready answer to the question, ‘what is your greatest accomplishment’ and would fire the entire staff as a result but there may be another factor at play here.

There have been may leaks claiming Kamala won’t do the work required and is unprepared for the job. It is hard to imagine that her staff did not at least try to prepare her for this interview, so flubbing such a basic question will only raise more questions.

When asked by CBS reporter Margaret Brennan what her biggest accomplishment as VP was, this is what Kamala came up with:

“Well, that is a great question. Umm, when I go to an event, whatever it is, and some dad or some mom brings their kids — daughters, sons – and says ‘That’s your vice president,’ and challenges their kids to think about who does what, as a way, I think, of empowering their kids to know they can do anything they want – not be confined by who has traditionally done what – I think that is, that’s one of the things I, that gives me joy, is to know that, that might be a possible impact.”

Her biggest accomplishment is being a woman and inspiring children? That’s why she was picked for the job, but there is no way the Dem Party stands a chance if that is all they got heading into 2022 and 2024. She elaborated on the answer listing things the Biden admin has promised, like removing lead pipes, but has not delivered yet, and as AOC complained won’t happen because they didn’t earmark enough money to complete the job.

Harris, who didn’t go to the border for 6 months and has been largely MIA said: “To not get out of D.C. more. I mean, and I actually mean that sincerely for a number of reasons.

“You know, I, we, the president and I came in, you know, COVID had already started. It was, the pandemic had started. And when we came in we really couldn’t travel.

“You know, a large part of the relationship that he and I have built has been being in this, you know, together in the same office for hours on end, doing Zooms or whatever because we couldn’t get out of D.C., and on issues that are about fighting for anything from voting rights to child care, to one of the issues that I care deeply about, maternal health.

“Being with the people who are directly impacted by this work, listening to them so that they, not some pundit, tells us what their priorities are. I think it’s critically important.

“People are, people have a right to know and believe that their government actually sees and hears them. And my biggest concern is, I don’t ever want to be in a bubble when it comes to being aware of and in touch with what people need at any given moment in time,” she said clueless that she is trapped in her own self-defined nightmare.

.@VP Harris admits that her biggest failure is not leaving DC more due to COVID: “My biggest concern is I don’t ever want to be in a bubble when it comes to being aware of and in touch with what people need at any given moment.”

More of @margbrennan’s exclusive interview this Sunday on Face The Nation pic.twitter.com/nw4pQ66wcr

May 24, 2022
Days After Pelosi Punished By Catholic Archbishop – Multiple Bishops Line Up To Support Nancy Ban