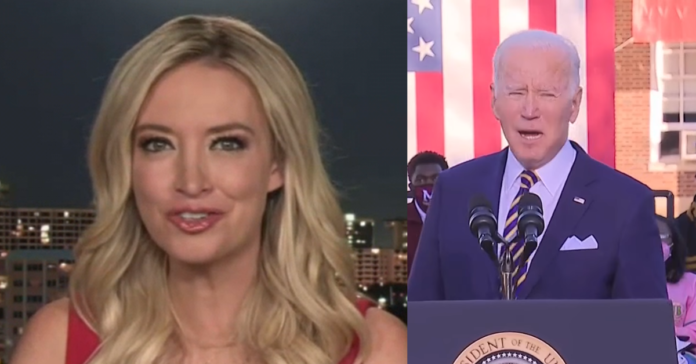 Former White House Press Secretary called BS on President Joe Biden after he and Vice President Kamala Harris showed their weakness and desperation with a political stunt in Georgia yesterday.

The stunt was so obvious as to be embarrassing and even Stacey Abrams gave ol’ Joe the snub job and didn’t bother showing up. Why bother showing up when the voting bill Biden talked about can’t pass because it doesn’t have the votes and based on the most recent election is not needed.

Worse for Biden and Harris is they not only know this, but they also know they are gaslighting America when they accuse GOP officials in states like Georgia of trying to suppress the vote.

Georgia Secretary of State Brad Raffensberger, no friend to Trump and in fact a guy the Dems call a hero for what he did in 2020, said the Dems are not being straight with the American people.

He pointed to Dem-run states like New York with worse voting laws than Georgia to make his case. Kayleigh said Biden is using this phony issue to distract from his failing agenda.

Fox News host Rachel Campos-Duffy pointed out that more people voted after voting rights bill SB 202 was passed in Georgia than before.

“That’s exactly right. You are referring to the municipal elections in 2021. More people voted after than before. Not only that, The Atlanta Journal-Constitution, the big paper there in Atlanta said that there were no long lines, that it essentially went flawless.

“But, of course, you have the president going down and gaslighting, saying this is Jim Crow 2.0.

“He’s been fact checked on this but taking a bird’s eye view as to what happened today in the speech, Rachel it, boils down to this.

“When you look at issues 1, 2, and 3 in interest of priority to voters and any polling, you see the economy, you see COVID, you see immigration.

“So what he has done is pivoted to an issue, voting, that has an asterisk by it in the Gallup November poll, because it is so significantly insignificant in the issues of interest to voters that it doesn’t even register at 1%.

“So he’s pivoted to this issue and called anyone who opposes him racist.

“That is the playbook.

“It’s an act of desperation.

“Indeed, the Biden administration is desperate now a few months ahead of the November elections here in 2022,” she said.

Even Mitt Romney called out Biden’s BS: “And so, President Biden goes down the same tragic road taken by President Trump — casting doubt on the reliability of American elections.

“This is a sad, sad day. I expected more of President Biden, who came into office with the stated goal of bringing the country together,” Mitt said.