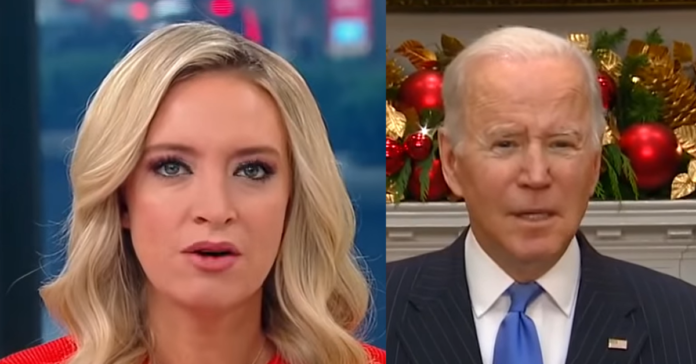 Kayleigh said: “At the end of the day, no one has politicized this virus more than President Joe Biden. You have the mask-wearing incident there, you have Kamala saying on the campaign trail, If Donald Trump tells me to take the vaccine, I won’t take it.

“You had Biden mimicking that rhetoric. Then they get into office. Yay, take the vaccine. That should have been the message back on the campaign trail as well on travel restrictions. Trump’s xenophobic for this, and now all of a sudden travel restrictions work.

“Are you sensing a pattern here? Because you should.

“It is a politicization of this virus on this campaign trail.

“They were always effective.

“Where’s the consistency rather than outright politicization of COVID 19?”

President Joe Biden on Monday said he doesn’t expect the U.S. to impose additional travel restrictions to stem the spread of the coronavirus omicron variant, sending some airline stocks higher.

Airline and aerospace stocks fell sharply on Friday after several countries reported cases of the omicron variant and established new travel restrictions. The U.S. on Monday began to temporarily bar visitors from South Africa, where scientists first reported the strain, and from Botswana, Zimbabwe, Namibia, Lesotho, Eswatini, Mozambique, and Malawi.

The degree of the variant’s spread will determine whether more travel restrictions are necessary, Biden said at a news conference Monday.

“I don’t anticipate that at this point,” he said. The president also said he doesn’t think lockdowns are necessary.

President Biden on Monday described the omicron variant of COVID-19 as a “cause for concern” but not a cause for panic, saying Americans getting vaccinated and getting their booster shots is the best defense against the virus.

He also said officials would release more guidance on how they plan to fight the spread of COVID-19 this winter, but promised it wouldn’t include lockdowns.

“This variant is a cause for concern, not a cause for panic,” Biden said in prepared remarks at the White House. “We have the best vaccine in the world, the best medicines, the best scientists, and we’re learning more every single day. And we’ll fight this variant with scientific and knowledgeable actions and speed. Not chaos and confusion.”

The president acknowledged the U.S. would see confirmed cases of the latest strain of the virus “sooner or later.”