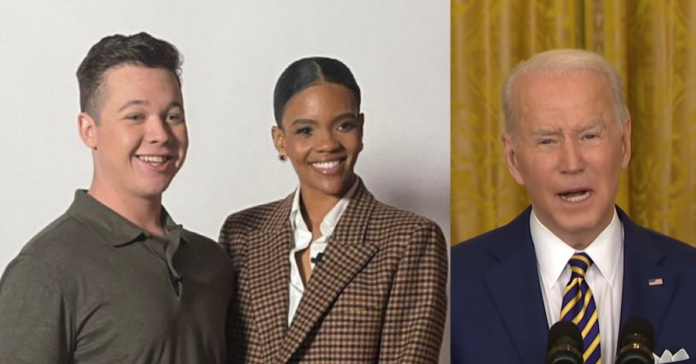 Kyle Rittenhouse put the media on notice in a new interview with Daily Wire host Candace Owens saying he was a ‘normal kid’ who wanted to ‘help people’ before he was smeared by the media and their friends on the left like Joe Biden and put on a BS trial by an overzealous prosecutor.

He also said he would have voted for Donald Trump for president if he was old enough to vote during the last election. He also credited Trump with helping, ‘tell the truth of what happened.’

Rittenhouse said: “I was a lifeguard, I was a swim instructor, and I was a firefighter EMT cadet, and a police explorer, so I just wanted to help people before all this. And I still wanna help people.

“It’s been hard since the night of the attacks, definitely been waking up at night with cold sweats.”

He said he “didn’t realize how big the case actually was until a few months later” and then said the words CNN and others are dreading:

I joined @RealCandaceO today on her show, tune into @realDailyWire tomorrow to watch! pic.twitter.com/Qjuh39n3DC

“There’s going to be some accountability, Candace,” Rittenhouse said in response to a question by Owens about what he is going to do with the media and people like Biden who falsely smeared him.

“I would never have voted for Joe Biden,” Rittenhouse added.

“I would have voted for Trump. Trump was right, he supported me from the beginning and he helped tell the truth of what happened,” he said.

From The Washington Examiner:

The Republican lawmaker presented the legislation that would require the state of Tennessee to reimburse costs to defendants who were found not guilty of homicide charges due to having acted in self-defense.

The legislation states that the payment amount would be decided by the court but could be denied if there was criminal activity involved.

“If someone in Tennessee is placed in the same situation as Kyle Rittenhouse in the future, he/she can at least be financially compensated,” Griffey told WZTV.

“My bill will help deter what happened to Kyle Rittenhouse from happening to someone in Tennessee and will help protect the right of Tennesseans to self-defense.”

Griffey also presented a proclamation to honor Rittenhouse as “a hero who selflessly defended his community, protected businesses, and acted lawfully in the face of lawlessness” and “a symbol of things that the Left is trying to destroy — our Constitution and our Second Amendment gun rights” who “provides a light of hope that we can fight back against the enemies of our Constitution and win.”