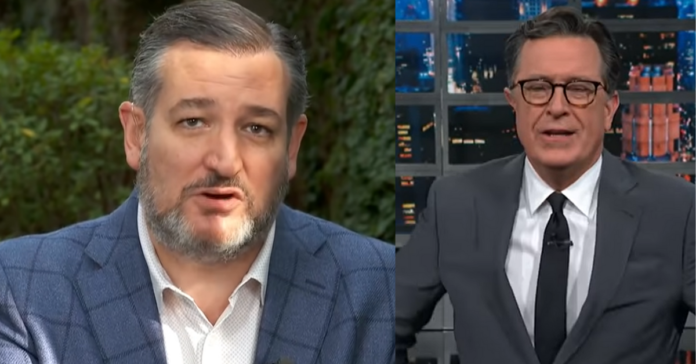 Stephen Colbert took some time during his show to discuss the not guilty verdict of 18-year-old Kyle Rittenhouse. Rittenhouse, to anyone who watched the trial, was railroaded by overzealous prosecutors looking for a national profile.

They should face sanctions or get demoted for embarrassing the state of Wisconsin by bringing such a flimsy case.  The media too needs to face Kyle in court. But when Colbert talked about the case did he admonish the media and the prosecutors? No, instead he said if Kyle did not break the law we need to change the law.

Colbert said: “The big news on Friday was that after being accused of crossing state lines, killing two people and wounding another last year during a Black Lives Matter protest, Kyle Rittenhouse was acquitted on all counts.

“Ok. Cards on the table, I am not a legal expert so I can’t tell you whether or not Kyle Rittenhouse broke the law.

“But I can tell you this, if he didn’t break the law we should change the law.

“Rich Democrats believe you have no right to defend yourself from an angry mob.

“He was being violently attacked by three dangerous felons; a jury of his peers found that Kyle Rittenhouse acted in self-defense.

“What Colbert is arguing is to outlaw the ability to defend oneself.”

Kyle had a message for Biden and the rest of the goons in the media who rushed to judge him and tarnished his good name:

“Mr. President, if I could say one thing to you, I would urge you to go back and watch the trial and understand the facts before you make a statement. It’s actual malice, defaming my character for him to say something like that.

“I’m not really sure [where the police presence was], because they have a hard job – but I didn’t really think they got the support they needed.

“The governor, Tony Evers, failed the community and there should have been a lot more resources to help with that.”