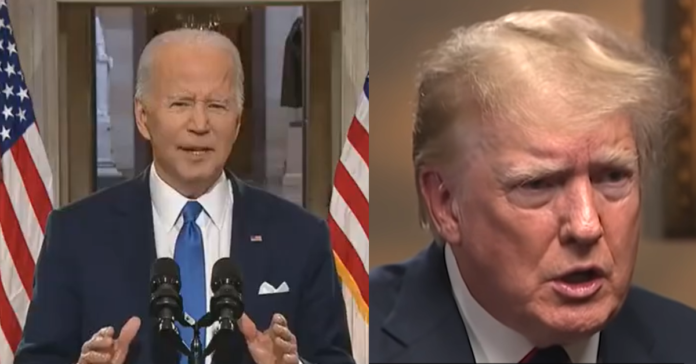 Former President Donald Trump fired back again at President Joe Biden and Vice President Kamala Harris for their speeches yesterday vilifying him. He accused Biden of being divisive yesterday and today he said Biden’s ‘unprecedented failures of his presidency and the left-wing extremism of the Pelosi-Schumer Congress have destroyed the Democrat Party.’

Trump said: “What we witnessed yesterday was the last gasps of a corrupt and discredited left-wing political and media establishment that has, for decades, driven our country into the ground—shipping away our jobs, surrendering our strength, sacrificing our sovereignty, attacking our history and values, and trying to turn America into a country that our people can barely recognize.

“But they are failing. No one believes them anymore. And the day is quickly coming when they will be overwhelmingly voted out of power. Joe Biden’s voice is now the voice of desperation and despair.

“His handlers gave him that speech to read yesterday because they know the unprecedented failures of his presidency and the left-wing extremism of the Pelosi-Schumer Congress have destroyed the Democrat Party.

“But for them, the worst part of it all is the knowledge that the American People are seeing right through their phony media event—which despicably compared a Pelosi-led security failure at the Capitol to the darkest days in American history and the deaths of 3,000 Americans.

“The people see right through that sham.

“They see a cynical politician who ran for office promising unity who is now doing the most divisive thing possible—slandering his political opponents as domestic terrorists, just like insecure dictators do in communist countries.

“The American People also see that January 6 has become the Democrats’ excuse and pretext for the most chilling assault on the civil liberties of American citizens in generations.

Today, I am more confident than ever in the strength and common sense of the American People.

“They are counting the days until we will no longer have to be constantly lectured, lied to, and dictated to by corrupt politicians and their media partners.

“When we will no longer have to put up with this broken establishment’s hoaxes and its manufactured media narratives—And as Biden and his radical handlers know, that day is coming fast.

“Because in the months and years ahead, the American People are going to speak up, take action, and VOTE in massive numbers.

“From the very beginning, all that Americans have wanted is great jobs, safe neighborhoods, strong borders, good schools, a proud nation, and a government that LISTENS to the American People.

“That is what our movement has always been about—and that is what we are focused on to this day.

“Joe Biden and the Radical Democrats have failed on every front. But do not lose hope. America WILL be Great Again,” he said.