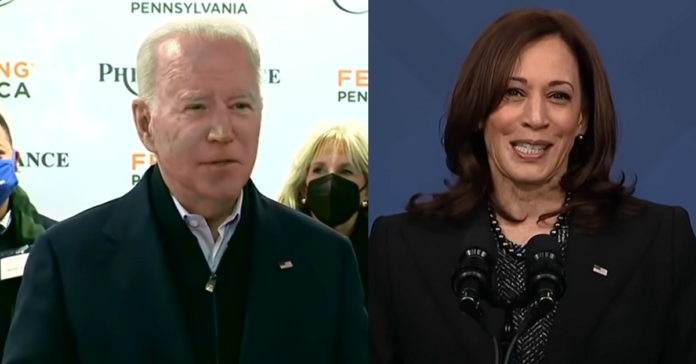 Americans are rejecting Joe Biden and the Dem Party in record numbers according to new data that spells doom for Dems up and down the ticket in 2022. Gallup just released data showing a massive swing to the GOP in party preference during 2021.

Democrats went from a nine-percentage-point advantage in the first quarter of 2021 to a five-point deficit to the GOP in the fourth quarter, one of the largest moves Gallup has ever seen. This is not an isolated incident either as a Dem consultant showed in a new report warning the Party of a huge swing to the GOP from Asian voters. The Dems are not only losing independents and swing voters, they are losing reliable Dem voting groups.

if these numbers hold, and they will unless Joe and Kamala get a miracle, we may witness a historic red wave in 2022. Josh Jordan broke down the new Gallup numbers: “In 2021, Republicans went from a 9 point deficit in party identification to a 5 point lead. If that were to hold into the 2022 midterms it would be a seismic victory on election night – this is the biggest advantage for Republicans since the 1994 “Republican Revolution.

“Yes, this Gallup poll is one poll that is still a year away from the midterm elections. That being said, the trend towards the GOP is undeniable and lines up with the 2022 generic ballot average moving about 6.5 points to the GOP since last spring, from D+5.5 to R+1 today.

“What’s interesting is that the move towards the Republican party (and away from Democrats) on Gallup is happening from every intensity level but esp independents in the middle:

In the second quarter, Democratic affiliation stayed high, while Republican affiliation began to recover, increasing to 43%.

The third quarter saw a decline in Democratic identification and leaning, from 49% to 45%, as Biden’s ratings began to falter, while there was no meaningful change in Republican affiliation.

In the fourth quarter, party support flipped as Republicans made gains, from 44% to 47%, and Democratic affiliation fell from 45% to 42%. These fourth-quarter shifts coincided with strong GOP performances in 2021 elections, including a Republican victory in the Virginia gubernatorial election and a near-upset of the Democratic incumbent governor in New Jersey. Biden won both states by double digits in the 2020 election.

A Dem strategist warned the Party about the swing to the GOP from Asian voters:

In 2020 there were troubling signs of attrition in Asian support for Democrats. The Asian vote for Democratic Congressional candidates weakened in some key races, particularly in California. And in Presidential voting in New York City, the very fast-growing Asian population in Queens swung strongly toward Trump. Matthew Thomas on his substack analyzed the data:

Since 2020, the danger signs have increased significantly. Consider the following:

In August, I reported that…Asian areas of Queens swung heavily toward Donald Trump in last year’s presidential election, powering the best performance by a Republican nominee in the World’s Borough since 2004. Precincts that are more than 75% Asian swung toward Trump by 16 points in 2020…[A]n analysis of [this November’s] returns in combination with demographic data from the 2020 census reveals that these patterns are trickling down to local elections too.

In 2017, Bill De Blasio won Queens precincts that are over 75% Asian by 34 points against Republican nominee Nicole Malliotakis. This week, [Eric] Adams won them by just 20 points over [Curtis] Sliwa: a 14-point swing toward Republicans.

…It is difficult to overestimate how important education is to Asian voters, who see it as the key tool for upward mobility—a tool that even the poorest Asian parents can take advantage of. But Democrats are becoming increasingly associated with an approach to schooling that seems anti-meritocratic, oriented away from standardized tests, gifted and talented programs and test-in elite schools—all areas where Asian children have excelled.

It does not seem mysterious that Asian voters might react negatively to this approach. In fact, it would be mysterious if they didn’t.  James Hohmann of the Washington Post captured the drawbacks of the current Democratic approach well in a recent column:

Efforts to lower academic standards and scale back educational opportunities in the name of racial equity are backfiring on liberals from coast to coast, including in the bluest big cities in America.

What’s interesting is that the move towards the Republican party (and away from Democrats) on Gallup is happening from every intensity level but esp independents in the middle:

“Precincts where at least 50% of residents are Asian swung 12 points toward Trump…”https://t.co/OCZNBESOl9