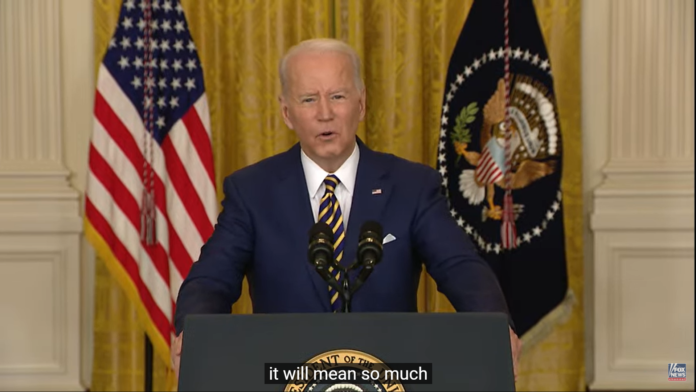 Emirates president Sir Tim Clark slammed President Joe Biden’s administration for another botched effort. Team Biden is simply incompetent. We have seen enough, no matter what it is, even simple tasks, they find a way to screw it up. This time their incompetence caused flights to be canceled across America.

Clark said: “Let the truth be known, we were not aware of this until yesterday morning to the extent that it was going to compromise the safety of operation of our aircraft and just about every other 777 operator to and from the United States and within the United States. It came to a head, it was known by the US operators probably a little bit more than we knew.

“We have evidence of letters being written to the Secretary of Transport in the US government alerting that group to what was likely to happen and its consequences. I need to be as candid as I normally am and say this is one of the most delinquent, utterly irresponsible issues, I’ve seen in my aviation career because it involves organs of government, manufacturers, science.

“The notion that, for instance, the United States government should sell its franchise for all the frequencies for a large amount of money, somebody should have told them at the time – that the risks and the dangers they placed in certain frequency uses around field, airfields, metropolitan fields that should have been done at the time.

“We were aware of a 5G issue. Okay. We are aware that everybody is trying to get 5G rolled out after all it’s the super cool future of whatever it may be communication and information flow.

“We were not aware that the power of the antennas in the United States have been doubled compared to what’s going on elsewhere.

“We were not aware that the antenna themselves have been put into a vertical position rather than a slight slanting position, which when taken together compromise not only the radio altimeter systems, but the flight control systems on the fly-by-wire aircraft.

“So on that basis we took that decision late last night to suspend all our services until we had clarity.,” he said.

“We’re continuing to work with the FAA, the FCC and the telecom industry to find a practical solution that will allow for the rollout of 5G technology while preserving safety and avoiding flight disruptions.”

United Airlines issues a statement that said: “We’re pleased the Biden Administration reached a compromise with AT&T and Verizon to avoid mass cancellations across the aviation industry. We look forward to a higher level of coordination between the regulators, telecom companies and the aviation industry to ensure that customers are not faced with disruptions going forward.”

“They want to charge me $400 extra to get on a flight tomorrow. I am from New Jersey, I spent $70 on an Uber to come here, I didn’t get an email or message. I just found out when I got here

“I’m supposed to go to my niece and nephew’s wedding two days after today, and I can’t get there.”

Emirates’ President, Sir Tim Clark, has criticized the roll-out of 5G in the United States after his airline… https://t.co/d4guLg6xGQ

Emirates president Sir Tim Clark has strong words Biden administration over its handling of 5G rollout but American airlines are staying quiet on blame. @Delta & @UnitedAirlines_ both say they’re grateful to government for brokering a deal with @ATT & @Verizon