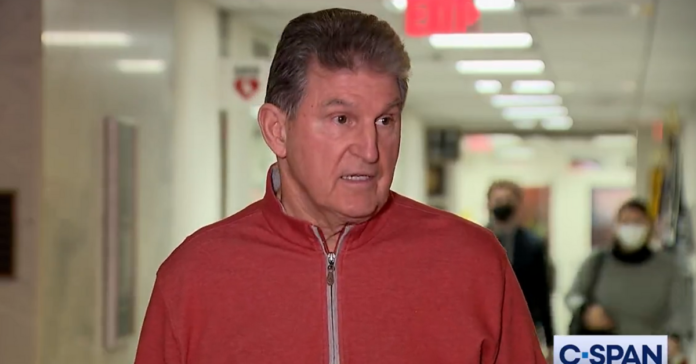 Senator Joe Manchin fired back at Senate Democrats after they issued threats to mount a primary challenge against him in West Virginia. Dem Senators are furious because Manchin shot down an attempt to force a voting bill through by changing the rules.

Manchin said he will not change the filibuster to pass a partisan bill. He said: “I’ve been primaried my entire life. That would not be anything new for me. Bring it on. The majority of my colleagues in the Democratic caucus have changed their minds. I respect that. They have a right to change their minds.

“I haven’t. I hope they respect that too. I’ve never changed my mind on the filibuster. I just don’t know how you break a rule to make a rule.”

.@Sen_JoeManchin: “I just don’t know how you break a rule to make a rule…The majority of my colleagues in the Democratic caucus, they’ve changed, they’ve changed their mind…I haven’t…I’ve never changed my mind on the filibuster. pic.twitter.com/7Byj5e5XDM

“We’ve bowed in their direction for months. I think we’ve shown them proper respect,” Dick Durbin said. “I don’t know where their loyalties start and end. They can only answer that themselves.”

“If Republicans choose to continue the filibuster of voting rights legislation, we must consider and vote on the rules changes,” Chuck Schumer said.

“Long odds are no excuse for this chamber to avoid this important issue. Again, members of this chamber were elected to debate and to vote. We’re going to vote.”

Asked about the likelihood of Manchin and Sinema being challenged by other Democrats, Sanders indicated he thinks “there’s a very good chance” of that happening, though he observed “it’s up to the people of those states.”

Asked if he would be open to supporting a challenger, Sanders answered bluntly: “Yeah, I would.”

Sanders’s comments reflect growing frustration with the two centrist Democrats among progressive lawmakers who are still angry over their roles in whittling down and stalling President Biden’s sweeping climate and social spending bill.

Though all 50 Senate Democrats support the voting and elections bill before the Senate, the Democratic caucus is pressing forward with laying blame on Manchin and Sinema (D-Ariz.) for the party’s failure to advance sweeping elections reform, thanks to their resistance to weakening the filibuster. The move carries considerable risk, given that Sinema and Manchin will be essential to any further success the party can muster this year — particularly on any resuscitation of President Joe Biden’s economic agenda.