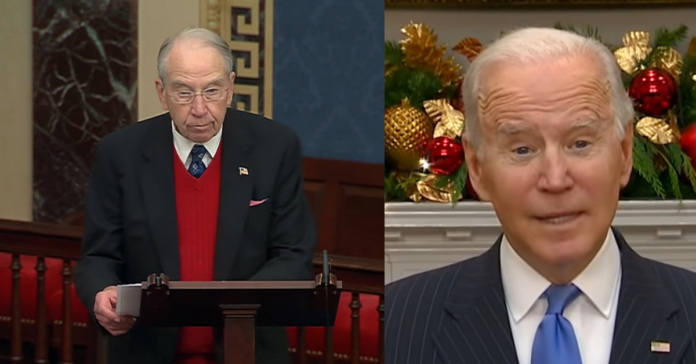 Senator Chuck Grassley made his move on the floor of the Senate and demanded an investigation into Joe Biden’s family ties to China. Chuck said: “This report shows the direct financial and legal relationship between Hunter Biden and individuals connected to the communist regime. It is yet another record that substantiates our report.

“So, to my Democratic colleagues who falsely smeared our report: you now chair committees that have jurisdiction over these matters, I challenge you to use the same effort and energy that you exerted in the Trump/Russia investigation to expose the extensive ties between the communist Chinese regime and members of the Biden family.”

Grassley was discussing a report he released along with Senator Ron Johnson that exposed the Biden family ties to the corrupt regime in China. Grassley issued a press release detailing the report:

“U.S. Senators Ron Johnson (R-Wis.), chairman of the Senate Homeland Security and Governmental Affairs Committee, and Chuck Grassley (R-Iowa), chairman of the Senate Finance Committee, released a report that revealed millions of dollars in questionable financial transactions between Hunter Biden and his associates and foreign individuals, including the wife of the former mayor of Moscow and individuals with ties to the Chinese Communist Party.

These were just some of the findings from their investigation into potential conflicts of interest arising from Hunter Biden accepting a position on the board of, and taking millions of dollars from, Burisma, a Ukrainian energy company with a long-standing reputation for corruption, while his father, Joe Biden, was vice president and the public face of the Obama administration’s handling of Ukraine policy.

Findings from the chairmen’s investigation include:

In early 2015 former Deputy Chief of Mission at the U.S. Embassy in Kyiv, Ukraine, George Kent raised concerns to officials in Vice President Joe Biden’s office about the perception of a conflict of interest with respect to Hunter Biden’s role on Burisma’s board.  Kent’s concerns went unaddressed and in September 2016, he emphasized in an email to his colleagues, “Furthermore, the presence of Hunter Biden on the Burisma board was very awkward for all U.S. officials pushing an anticorruption agenda in Ukraine.”

Hunter Biden was serving on Burisma’s board (supposedly consulting on corporate governance and transparency) when Burisma owner Mykola Zlochevsky allegedly paid a $7 million bribe to officials serving under Ukraine’s prosecutor general, Vitaly Yarema, to “shut the case against Zlochevsky.” George Kent testified that this bribe occurred in December 2014 (seven months after Hunter Biden joined Burisma’s board), and, after learning about it, he and the resident legal adviser reported this allegation to the FBI.

In addition to the over four million dollars paid by Burisma to Hunter Biden and his business partner, Devon Archer, for membership on the board, Hunter, his family, and Archer received millions of dollars from foreign nationals with questionable backgrounds.

Hunter Biden received a $3.5 million wire transfer from Elena Baturina. Ms. Baturina is the wife (widow) of the former mayor of Moscow.

Hunter Biden had business associations with Ye Jianming, Gongwen Dong, and other Chinese nationals linked to the Communist government and People’s Liberation Army. Those associations resulted in millions of dollars in questionable transactions.

Hunter Biden also moved millions of dollars from his law firm to James Biden’s and Sara Biden’s firm.  Upon being questioned about the transaction, Sara Biden refused to provide supporting documentation and information to more clearly explain the activity. The bank subsequently closed the account.

Hunter Biden paid nonresident women who were nationals of Russia or other Eastern European countries and who appear to be linked to an “Eastern European prostitution or human trafficking ring.”

As outlined in Senate resolution 70, the Senate Homeland Security and Governmental Affairs Committee has the express authority “to study or investigate… the efficiency and economy of operations of all branches of the government, including the possible existence of… corruption or unethical practices… [and] conflicts of interest.”

The Senate Finance Committee has broad jurisdiction over the United States Government and, the Department of Treasury and the Financial Crimes Enforcement Network (FinCEN), which includes oversight jurisdiction over potential financial crimes,” the report said.