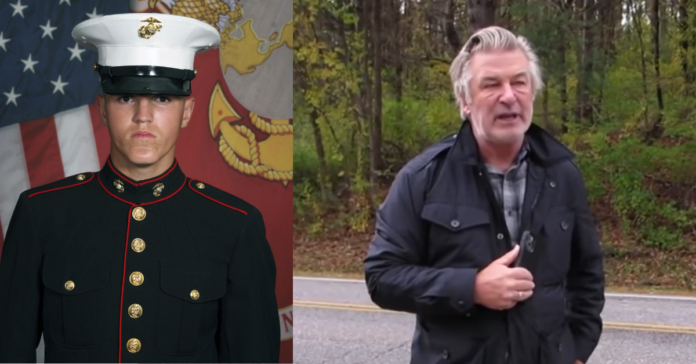 The family of a Marine killed in Afghanistan during President Joe Biden’s debacle in Kabul has sued Alec Baldwin for defamation accusing the Hollywood star of falsely accusing one of the Rylee McCollum sisters of being an “insurrectionist.”

McCollum’s sisters, Roice and Cheyenne, and his widow, Jiennah want damages of at least $25 million for the defamation, invasion of privacy, negligence and intentional infliction of emotional distress.

“Baldwin’s conduct was negligent and reckless as he should have known that making the allegations he did against Plaintiffs to his millions of followers would cause Plaintiffs harm,” the lawsuit says.

“I think it’s worth noting, too, that his social media following is five times the population of your state,” the family’s attorney, Dennis Postiglione, said.

“Either he knew what would happen, and he wanted it to happen, or he just didn’t think about it.”

The dispute is over what Alec posted on his Instagram page. Alec sent the family $5,000 after Rylee died during Biden’s debacle as a “tribute to a fallen soldier.”

Alec later discovered that one of Rylee’s sisters, Roice, was in DC on Jan 6 and posted a picture from the Washington Monument.

“Are you the same woman I sent the $ for your sister’s husband who was killed during the Afghanistan exit?” Baldwin wrote to Roice.

“When I sent the $ for your late brother, out of real respect for his service to this country, I didn’t know you were a January 6th rioter.”

The sister said she never went inside the Capitol, was peacefully protesting, and was already interviewed by the FBI who did not charge her.

“Your activities resulted in the unlawful destruction of government property, the death of a law enforcement officer, an assault on the certification of the presidential election. I reposted your photo. Good luck,” Baldwin wrote and after that, the hate mail came fast and furious prompting the lawsuit,

From The Cowboy State Daily:

Within 20 minutes of his post, Roice began to receive hostile, aggressive and hateful messages from Baldwin’s followers, the lawsuit said.

One message said “Get raped and die, you worthless [expletive]. Your brother got what he deserved.” Roice forwarded this message on to Baldwin, sarcastically thanking him for the post.

Baldwin ultimately followed the person who sent the message on Instagram. He also chimed in on the feed, calling Roice an insurrectionist and claiming she participated in the riot.

He also misidentified Jiennah as an insurrectionist in one Instagram comment, although she was not in Washington D.C. on Jan. 6, 2021. People began sending hateful and threatening messages Jiennah and Cheyenne McCollum, Rylee’s eldest sister.

Other messages called on Baldwin to get a refund of his money and comparing the McCollum family to ISIS and Nazis,

Baldwin did nothing to stop his followers from contacting the family, the lawsuit said.