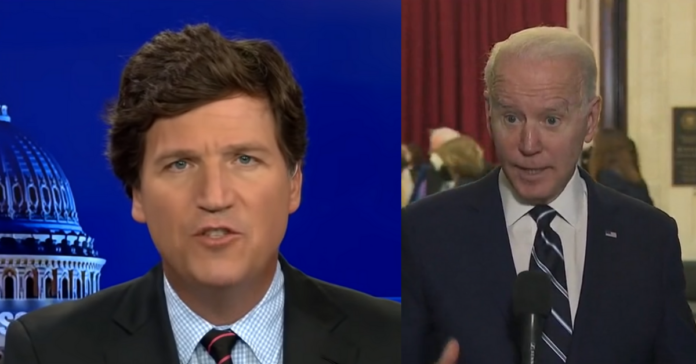 Tucker Carlson gave President Joe Biden some bad news telling the failing commander in chief that he is losing his lifeline, corporate media support, and when they stop covering for him it will be the ‘end of his presidency.’

Tucker gave examples of corporate media figures turning on Biden before blaming them for the debacle saying, the media ‘foisted this Biden calamity on the United States.’

Tucker said: “For Joe Biden the past few months amounted to the greatest political disaster of his life. In his case that’s not a small place to be. This is a man with three failed presidential campaigns on his resume, but this year has been different. We don’t mean to overstate it, but you can pick your humiliating ashes and sackcloth world-historic defeat, Stalingrad, Corregidor, Gallipoli and that is pretty much where Joe Biden is right now politically.

“Polls show him losing astounding levels of support from virtually every group of Americans who voted for him just a year ago. That would include Hispanics, moderate Democrats, African-Americans, and by big double digits, independents.

“At this point the White House is down to just two core constituencies: Anxious upper-income women with multiple college degrees and baron personal lives, and members of the national news media.

“And even that might be overstating Biden’s support given that there is such dramatic overlap between those two groups. Essentially they are the same people. Now, because it can always get worse, Biden appears to be losing even the media. This is an ominous development. It’s not an exaggeration to say that if this trend continues, it is the end of the Biden presidency.

“The media are the only reason Joe Biden is president and the first place. Biden didn’t campaign for the job, he didn’t hold rallies or give speeches or tell the public what he might do if elected.

“No, for nearly a year Joe Biden stayed home hiding in terror from infectious voters. Instead, he let news organizations make his case for him, which they did. The media hid Biden’s faults, they attacked and censored his critics. In general, they gave no hint at all that you might be electing a senile mannequin with a lifelong history of sleazy behavior. Voters had no clue, they didn’t know who Joe Biden actually was. And yet suddenly, news organizations have decided to tell them. It’s pretty amazing to watch it.

“BRIANNA KEILAR, CNN: President Joe Biden has had a very tough week with setbacks for his agenda. COVID complications and the Supreme Court blocking his vaccine mandate.

“CHUCK TODD, NBC: One year in Mr. Biden has the second-lowest approval rating ever measured in the White House. And it has never been less popular nationally.

“MARGARET BRENNAN, CBS: 2022 is not exactly off to a good start for the Biden administration.

“JOHN KING, CNN: The country is frustrated, his party is frustrated, we are two weeks into a midterm election year, a few days away from a one-year anniversary, and it is very dark for him right now.

“DONNY DEUTSCH, MSNBC:  Your audience is not going to be happy with what I have to say. I don’t think he’s come across as an inspirational figure. I could give a litany of things he accomplished, and obviously there are things that have not gone well. But there is something else different. How many people do you talk to and they say, ‘he seems old.’ And I don’t mean that as an ageist thing. It really started with Afghanistan where he just didn’t seem to have his hand firmly on the wheel. I think a lot of this has to do with the messenger versus the messages itself. He doesn’t feel in charge.

“Wait a second. You are telling us that Joe Biden doesn’t “seem to have his hand firmly on the wheel.” Really? You sure we’re talking about the same president here. Wasn’t this the guy not so long ago was challenging strangers to push up contests at town halls.

“He single-handedly rescued Nelson Mandela from the hell of Robben Island. This is the man who faced down Corn Pop with a chain at a public swimming pool. Now you are saying that man, that chiseled monument to decisive masculinity may be losing his grip?

“Yep, that is exactly what they are saying. And they seem almost bashfully apologetic as they say it. They had no idea Joe Biden was a lumbering, desiccated husk. No idea at all. They never saw Biden call anyone a dog-faced pony soldier.

“They didn’t notice him sniffing anybody’s hair or staring blankly into the middle of the distance like a lobotomy patient. They never saw it. They are as shocked as you are. CNN’s resident Nobel Prize winner came to the awful conclusion that maybe Joe Biden isn’t doing an amazing job as president.

“The media foisted this Biden calamity on the United States, they got him elected, then they lied and distracted the population as he and the marionette operators who controlled him wrecked a lot of this country. That happened and it’s too late now to deny responsibility. These people are fully implicated in what they did. Lots of them are,” he wrote.