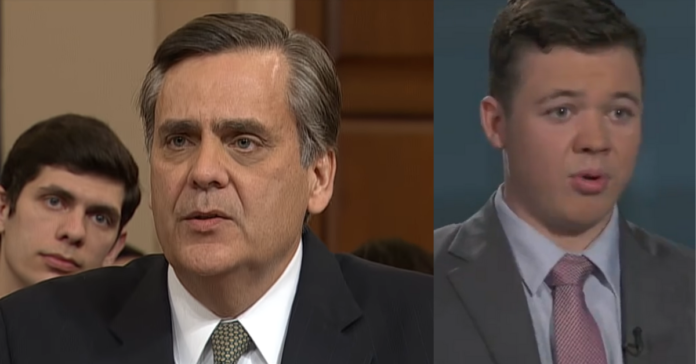 Turley wrote: “Many are using the verdict as an excuse to denounce the entire legal system as racist, even though the makeup of the Rittenhouse jury – 11 Whites and one African American – is identical to the jury that recently convicted three men in the killing of Ahmaud Arbery in Georgia. Critics also ignore that much of the coverage of the Rittenhouse case ignored evidence supporting his claim of self-defense.

“Now students and groups at Arizona State University are planning a rally against Rittenhouse and demanding that he be expelled. Demands for such extrajudicial punishments may seem legitimate to critics of the verdict with leaders like Biden calling Rittenhouse a “white supremacist” before any investigation was completed and legal analysts calling the entire trial “white supremacy on steroids.”

“Rittenhouse is likely to face such campaigns to bar him from any campus as he seeks to continue his education. We saw a similar campaign to block Nick Sandmann, who was wrongly accused of racist attacks on a Native American activist, from attending Transylvania University.

“Even though some media outfits corrected their false coverage of Sandmann and others settled the lawsuits he filed against them, the ACLU’s Samuel Crankshaw in Kentucky denounced Transylvania University for allowing Sandmann access to an education at the school.

The fact is that Rittenhouse cannot be expelled or kept off ASU’s campus due to such mob measures. He would quickly prevail in court. However, the rally and the rhetoric magnify the risk to his safety by those who demand “accountability” regardless of any verdict.

We have seen faculty members join such mob efforts, even attacking others on campus, blocking speakers, destroying political signs, or encouraging attacks on student journalists.

It is less common to hear professors today speak out for the rights of conservatives or others who are being targeted by campaigns on campus. The risk is simply too great that they will be “tagged” as intolerant, racist or reactionary.

ASU has responded to the controversy. Rather than rejecting the premise of barring a student based on such protests, the school simply noted that he is not currently enrolled. There is no need to cancel him if he is not currently a student. Problem solved. Yet, the planned rally still illustrates how education is now seen as a means to mete out punishment in lieu of conviction.

It is not surprising that Rittenhouse, who was looking at life in prison, did not register for classes this coming term. That would have been rather presumptuous with many in the media declaring him all but convicted before the start of opening arguments. He is likely to now move on with his life and will seek admission to ASU or another school. The question is whether he will be allowed access to an education or whether schools will yield to this campaign to bar him from any campus.

It is common for former felons (including violent offenders) to take classes or give lectures on campuses without such protests. It is not clear whether any school will admit this acquitted teenager given the protests at ASU and other universities.

If admitted, Rittenhouse has every right to attend ASU in person and has every right to expect that he can do so safely. If ASU cannot muster the integrity and courage to reaffirm those rights publicly, it has abandoned a core defining element for higher education.

Colleges often sit in cringing silence as individual students are targeted and harassed. It is not clear whether Rittenhouse will seek to continue at ASU or other universities. However, his education should not be treated as a vehicle for collective extrajudicial punishment,” he wrote.

Turley was responding to some far-left students trying to ban Kyle. The Arizona State University Students for Socialism, Students for Justice in Palestine, Multicultural Solidarity Coalition, and MECHA de ASU want Arizona State University administration to withdraw Kyle from the university. The four groups are calling him “Murderer Kyle Rittenhouse.”

The groups are taking this loser of an argument as far as hosting a “Rally and protest to get murderer Kyle Rittenhouse off our campus” on Dec. 1.

“Even with a not-guilty verdict from a flawed ‘justice’ system – Kyle Rittenhouse is still guilty to his victims and the families of those victims,” the demand letter says. “Join us to demand from ASU that those demands be met to protect students from a violent blood-thirsty murderer.”

A Students for Socialism at Arizona State University spokesperson said:

“The goal of these demands is to let the ASU administration know that we as the ASU community do not feel safe knowing that a mass shooter, who has expressed violent intentions about ‘protecting property’ over people, is so carelessly allowed to be admitted to the school at all.

“Our campus is already unsafe as is, and we would like to abate this danger as much as possible.”

The spokesman said that the Rittenhouse trial “effectively gives right-winged individuals the license to kill other individuals who protest for human rights.”

“Rittenhouse took the lives of innocent people with the intent to do so—by strapping an assault rifle to himself in a crowd of unarmed citizens.

“That is the textbook definition of intention.

“The decision made by the court is one of thousands of cases that have been influenced by biased judges, predominantly white juries, and mistakes inherent in a judicial system founded off of injustice to begin with.”

Join us and rally against racist murderer Kyle Rittenhouse being permitted on our campus – Wednesday at 3:30 outside the Nelson Fine Arts Center on campus pic.twitter.com/4Hs3JxRqtY

Student organizations at ASU are organizing a protest to get Kyle Rittenhouse (who is an online student) kicked out of ASU pic.twitter.com/qHy4xM6nri