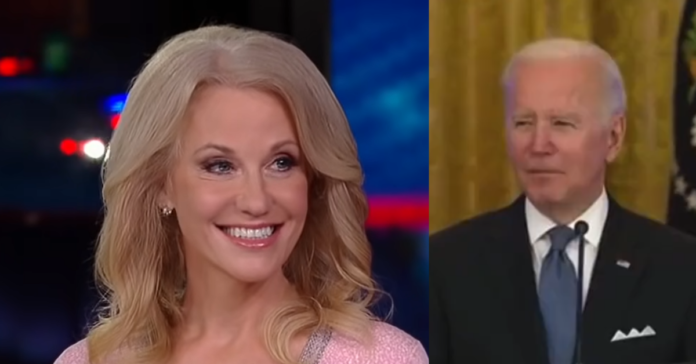 Former Trump senior adviser Kellyanne Conway slammed President Joe Biden over his latest outburst at the press. Biden called Fox News’ White House correspondent Peter Doocy a “stupid son of a b*tch for asking a question about inflation and Conway let him have it.

She said on the debut of “Jesse Watters Primetime”: “Remember, Biden said he’d like to take Donald Trump out behind the high school gymnasium to punch him in the nose? So this is a guy with a terrible temper. He’s not taking happy pills on the weekends in Wilmington, clearly.

“This is the second time in a week that a Fox News White House correspondent has been derided and castigated by the president. This is a guy who is seen as no longer easygoing and likable. So his personal attributes have cratered along with job approval.”

Biden swore at Doocy after telling Fox News’ Jacqui Heinrich that her question on Ukraine-Russia was “stupid” a few days ago.

Conway said Heinrich’s question, “Was an excellent and timely question about sanctions against Russia and there President Biden called her question stupid. Here, he called Peter Doocy stupid.”

“If Biden would get as angry as he did with Peter Doocy about crime in this country. I think people would respect that a lot more,” Jesse Watters said. Appearing on “Hannity” later, Doocy said the president called him “within about an hour” of calling him a stupid SOB to clear the air.

Doocy told Sean Hannity: “He said ‘It’s nothing personal, pal. And we went back and forth, and we were talking about just kind of moving forward, and I made sure to tell him that

“I’m always gonna try to ask something different than what everybody else is asking. And he said, ‘You got to.’ And that’s a quote from the president, so I’ll keep doing it.

Doocy said, “He cleared the air and I appreciate it. We had a nice call.

“That’s not an answer,” Hannity said. “That doesn’t sound like an apology.”

“He said ‘It’s nothing personal, pal.’ And I told him that I appreciate him reaching out.

Hey Sean, the world is on the brink of, like, World War III right now with all of this stuff going on. I appreciate that the president took a couple of minutes out this evening while he was still at this desk to give me a call and clear the air.

“I don’t need anybody to apologize to me. He can call me whatever he wants as long as it gets him talking.

“I think that’s enough. That’s enough. So we can move on. We can now move forward. There will be years- three to seven years of opportunities to ask him about different stuff.”