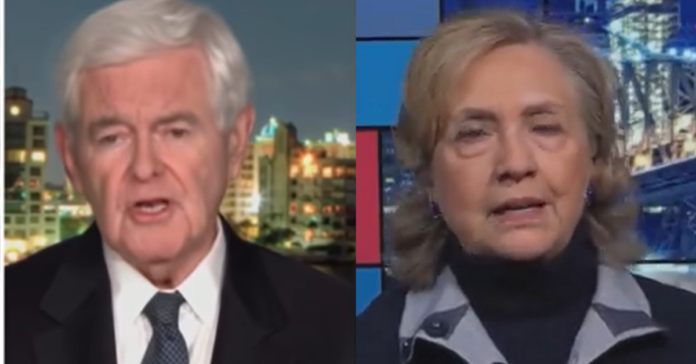 Newt Gingrich fired back at failed presidential candidate Hillary Clinton after the former first lady insulted the American voter saying they didn’t appreciate what Biden has done so far.

“Socialism has its own internal logic,” he said. “They don’t think very far ahead. In a world where you need to play 4-dimensional chess to be a leader at that level, they can barely play tic-tac-toe. You saw it with Granholm.”

“The fact is that big government socialism doesn’t work,” Gingrich said. “They can’t say that.”

“You know, democracy is messy. You know, a lot of people got, oh I think, kind of frustrated looking at the messy process of legislation.

“And they didn’t really appreciate that, within a year, the Biden administration has passed two major pieces of legislation through both the House and the Senate.

“By any measure those are extraordinary accomplishments.

“But because of the way we are getting our information today, and because of the lack of gatekeepers and people who have a historic perspective who can help us understand what we are seeing, there is a real vulnerability in the electorate to the kind of demagoguery and disinformation that, unfortunately, the other side is really good at exploiting,” she said with a straight face.

“Well, we certainly need new rules for the information age, because our current laws, our framework, it is just not adequate for what we are facing.

“I want to mention one other thing that is on the horizon, that people are only beginning to pay attention to.

“There are so many big questions that the Biden administration must address, I just don’t think we have much time and therefore, I hope, from everything I’me hearing from them, that’s exactly what they’re going to try do,” she said.

“What we’ve seen, sadly, in the last several years, is not new in our history … but it is, unfortunately, turbo-charged by the combination of demagogues, social media…” -Hillary Clinton on an old problem with a new twist pic.twitter.com/QHvbsD4GSz

“I do think that we are facing a crisis of democracy, crisis of legitimacy,” Hillary Clinton says on threats to democracy. “The increasing ability to manipulate people through algorithms and other forms of artificial intelligence will only make this harder to combat.” pic.twitter.com/QX5xR4I5Iu

The fight to preserve our democracy is a worthy and necessary battle. We can never give up because the stakes are simply too high. https://t.co/MXtURDrjYF