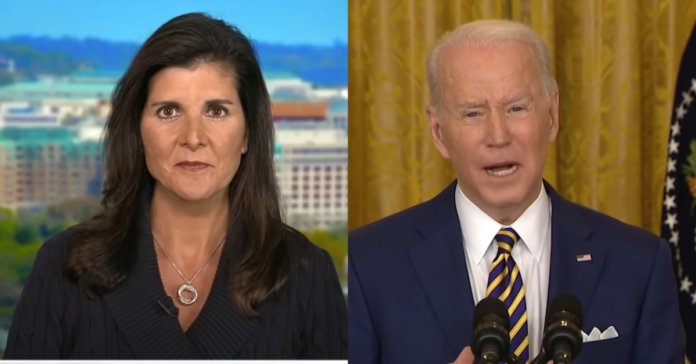 “They have sold us out by letting the world watch what happened in Afghanistan as we watched our American soldiers die. They continue to show weakness in the fact that they can’t seem to get it together with Ukraine and Russia.

“I mean look, I dealt with the Russians for two years at the U.N. My first speech was against Russia and aggression towards Ukraine. I know how they think. What they are doing is Putin absolutely gets this is an opportunity.

“The same way Xi does and North Korea and Iran. America has never had a president this weak and if they want something they better take it now because they know Americans will not keep this in 2024, so they are trying to move now.

“What you look at is that Putin’s intention was never to go to war. It’s not popular for Russians to want to see their troops go to war.

“He doesn’t have the money to do it.

“But he’s willing to do it if he can win something, and he smells blood in the water and that’s what we are seeing him do,” she said.

President Biden’s first press conference in 10 months, on the eve of his inauguration’s anniversary, made news. But not the kind he wanted.

Asked about Russia’s possible invasion of Ukraine, NATO’s lack of unity and the likely failure of economic sanctions to deter Vladimir Putin, Biden answered that “the idea that NATO is not going to be united, I don’t buy…It depends on what Russia does.

It’s one thing if it’s a minor incursion and then we end up having a fight about what to do and not do, et cetera.”

In a stroke, Biden demonstrated he didn’t understand his own Ukraine policy, undercut Kiev’s government and people, and handed Moscow an engraved invitation to make a “minor incursion” into Ukraine.

That was bad enough, but further answers made his position even more unintelligible.

But it depends on what [Putin] does, as to the exact — to what extent we’re going to be able to get total unity on the Rus — on the NATO front.”