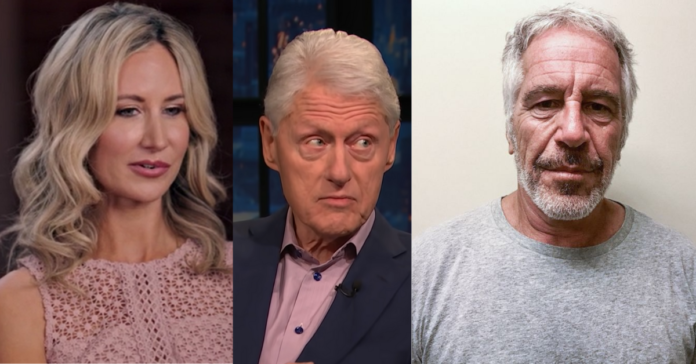 In a new documentary, she made some explosive claims that sound more like the truth than anything coming out of Bill or Hilliary Clinton’s mouths. Lady Victoria Hervey, who was in the room, is claiming that Jeffrey Epstein and Bill Clinton ‘were like brothers.’

The 44-year-old socialite is the daughter of the 6th Marquess of Bristol. She first met Epstein and Ghislaine Maxwell 20 years ago. She said: “Clinton was definitely very close to Jeffrey.

“I don’t know if you saw the paintings that were in Jeffrey Epstein’s house? One of them being a portrait of Bill Clinton wearing the dress that Monica Lewinsky wore when they had the affair.

“So yeah, he was super close to Jeffrey Epstein. They were like brothers, you know, and he was close to Ghislaine as well.

“Jeffrey was really the frontman and Ghislaine was the accomplice.

“You know, it was kind of like a Batman and Robin and they were a double act.

“I don’t think Jeffrey could have done any of it without Ghislaine.’

The filmmaker asked her: “And Ghislaine was crucial to getting those girls, was she, do you think to those dinners?”

Lady Victoria said: “I think he just kind of sat back and sort of waited for her to sort of go fishing and go find however many girls were needed, you know, to entertain his friends.

“I think I was pretty much used as bait.

“You know, looking back at, you know I was really young and naive, and she’s entertaining these, you know, big businessmen.

“So I didn’t realize it of course at the time, but looking back,” she said.

From The Daily Mail:

Andrew is said to have visited Epstein at a number of the billionaire’s residences – including Epstein’s island of Little St James – and his name is recorded on the flight logs of Epstein’s private jet that become known as the Lolita Express. Virginia Giuffre alleges the Duke sexually abused her on the island – which he denies.

Maxwell’s brother Ian Maxwell said that Prince Andrew and his sister ‘were good friends. I don’t know how often she got to see him at Buckingham Palace. I met him a few times in London. She didn’t take any s**t from anyone,’ he said. ‘I think that Prince Andrew would have found that rather refreshing.’

Speaking about his sister’s guilty verdict, Ian Maxwell said: ‘I’m just damn angry. And I don’t understand how anyone looking at this can not feel that way. It’s just wrong. I have devoted a lot of my time to helping Ghislaine. We believe her, we love her. And we hope that she will get the justice that she definitely deserved.’

Lisa Phillips, one of Epstein’s victims, described her time on the island as a 21-year-old to ITV.

‘We went to the quarters where we were to sleep. A woman (Maxwell) came to the door and said Jeffery was ready for his massage. She made it seem like it was something normal, that it was no big deal. Once we were in the room, doing the massage, is where things took a turn. And it wasn’t normal anymore,’ Ms Phillips said.

‘I went along with it. That’s just what happens in those situation. You’re not going to kick and scream and fight and yell when you’re on an island.’