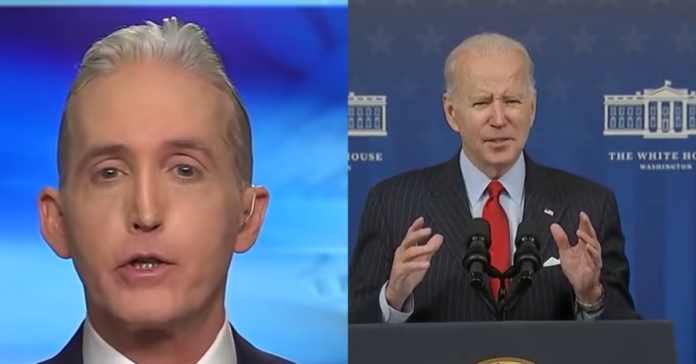 Fox News host Trey Gowdy accused President Joe Biden of deliberately using misinformation to denigrate the state of Georgia. Trey pointed out the political absurdity of Biden smearing the only southern state he won in 2020 but we have come to expect total and absolute incompetence from everything the Biden White House does so it is not surprising.

And to make it clear how clownish this White House is, anyone with a computer can easily prove Biden is wrong on the issue. Because Georgia had an election after the law passed and voting increased not decreased.

Trey said: “Less than one year removed from his inaugural address where he talked about unity to the everlasting delight of editorial boards across the country, this president is dividing the country again using race and voting.

“It’s not hard to vote in Georgia. It’s actually pretty easy so easy that Biden won in Georgia along with two Democrat candidates for Senate.

“Which is why it’s so hard to understand why he would want to denigrate one of the few southern states he has a chance to win.

“But he did, and he used deliberate misinformation to do it.

“Biden wants to change the Senate rules, so he can federalize elections.

‘He says voting rights are so important the rules of the Senate must be changed.

“What about the judges who preside over voting rights cases, they’re important too aren’t they?.

“Why not change the rules for judges?

“What about the U.S. attorneys and FBI agents who enforce these laws? What’s the use in having laws if they aren’t enforced?

“Let’s change the Senate rules for U.S. attorneys and FBI Directors too?

“And you need money to enforce and prosecute voting Laws so let’s change the rules for budget and appropriations while we’re at it,” Trey said.

The Devil went down to Georgia by Trey Gowdy https://t.co/N5JuC0x8zN