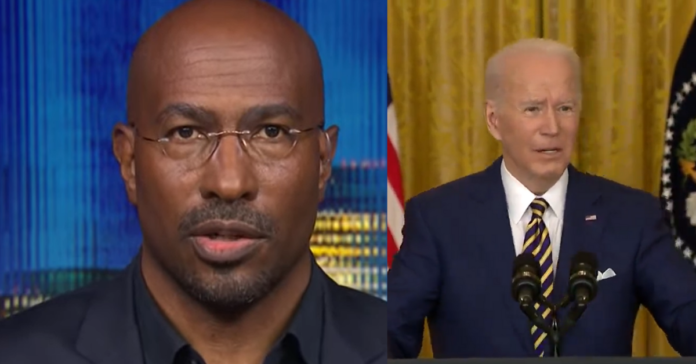 CNN host Van Jones came clean on live television ripping President Joe Biden for being ‘foggy’ and ‘meandering’ during his first press conference in ages. If CNN and other media outlets stop covering for this White House the Dems are in real trouble.

Van Jones said: “I think you have to be honest that you can be a foggy, meandering president. Say, like Reagan near the end, if you’re winning. But if you are foggy and meandering on key questions and you’re also not winning, then you’ve got a real problem.”

Jones said Biden did one good thing, forcefully commit to Kamala Harris as his running mate in 2024, but even that moment of clarity backfired because Jones said it made Biden’s meandering more pronounced.

Jones said: “I think a lot of Democratic voters appreciate that. That’s the one time that you don’t want give any fuzzy, foggy, let-me-tell-you-a-long-story, answer. Clear and direct, they are a team.

Van Jones has courage. You may disagree with him, but he doesn’t care what Twitter thinks. https://t.co/tZVynutuFi

“He is staying together. They are going to fight it forward.

“I think that part of the reason that answer stood out so much is because some of the other answers were kind of foggy and meandering.

“I think the real challenge that you have is the numbers are out there that are bad.

“But this party has got to come together, and start putting some wins on the board for this president.

From The Daily Mail:

The Democrats suffered another loss after the Senate failed to advance their voting rights bill.

Biden, taking to Twitter, said he was ‘profoundly disappointed’ that the Senate ‘failed to stand up for democracy’ but will continue to fight for the legislation.

‘I am disappointed — but I am not deterred,’ he said. ‘We will continue to advance necessary legislation and push for Senate procedural changes that will protect the fundamental right to vote.’

The president argued the legislation was needed in wake of last year’s insurrection at the US Capitol in which supporters of former President Donald Trump attempted to suppress ‘the sacred right to vote and subvert the American bedrock of free and fair elections.’

Biden added: ‘My administration will never stop fighting to ensure that the heart and soul of our democracy – the right to vote – is protected at all costs.’

VIDEO – Van Jones: Some of Biden’s Answers Were ‘Foggy, Meandering,’ Just Like Reagan Near the End https://t.co/ZDbY7f9fjl